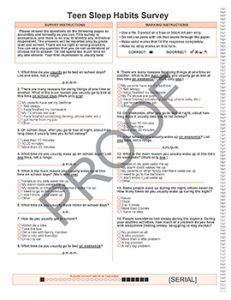 For more information about accessing and using this survey, please contact: 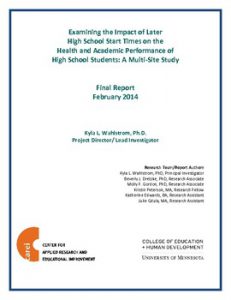 The results from this three-year research study, conducted with over 9,000 students in eight public high schools in three states, reveal that high schools that start at 8:30 AM or later allow for more than 60% of students to obtain at least eight hours of sleep per school night. Teens getting less than eight hours of sleep reported significantly higher depression symptoms, greater use of caffeine, and are at greater risk for making poor choices for substance use. Academic performance outcomes, including grades earned in core subject areas of math, English, science and social studies, plus performance on state and national achievement tests, attendance rates and reduced tardiness show significantly positive improvement with the later start times of 8:35 AM or later. Finally, the number of car crashes for teen drivers from 16 to 18 years of age was significantly reduced by 70% when a school shifted start times from 7:35 AM to 8:55 AM. 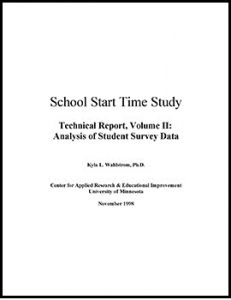 Effective with the 1996-97 school year, the Edina School District was the first district in the U.S. to change to a later starting time for their high school, going from 7:20 AM to an 8:30 AM start. This Volume II Report reports the data analysis and findings for survey responses from 7,168 secondary students, comparing the results from the Edina students to students in 16 additional school districts in the Minneapolis/St. Paul area. The report also provides a comparison of findings for students in Rhode Island who also experienced a change to a later start time. The survey used was the School Sleep Habits Survey created by Bradley Hospital at Brown University. A discussion of the comparative findings and possible future research studies is also included.