The Math and Numeracy Lab

Numbers in Context is Dr. Mazzocco’s primary research program. It concerns the foundational role of cognitive development in the development and nature of mathematical thinking in children and adults. Some ongoing and completed studies focus on the following:

Note: We piloted all of this work at the 2014 Minnesota State Fair, in the Driven to Discover Research Pavilion: 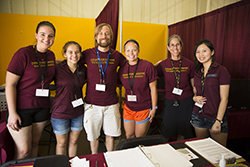 The 2014 Math and Numeracy Lab at the Minnesota State Fair: Driven to Discover!